Bear with Cub by Pootoogook Jaw

This Bear with Cub by Pootoogook Jaw is one of Pootoogook’s more traditional animal carvings.Pootoogook Jaw is a carver based out of Kinngait (Cape Dorset), NU. Jaw began carving at a young age by learning the skill from his father. He has since become known for his detailed renditions of Arctic wildlife, hunters, drum dancers and scenes of traditional Inuit life. One of the three sculptor sons of master carver Joe Jaw, [Kingwatsiak (King) Jaw, Mathew Saviadjuk] Pootoogook has been carving from an early age. He uses a wide range of subjects in his work, and his style varies depending on the nature of the stone that he is dealing with. He enjoys carving human figures like drummers and musicians and honours his Inuit heritage. At times, his sculptures have multiple figures interacting and are almost obsessively detailed; at other times, particularly when working with very hard stones, his work is simpler and more iconic. His quiet sense of humour often surfaces in his work.

Jaw has been active in mentoring younger generations of carvers. In 1998 he organized a carving program through the Nunavut Training Company to help teach less experienced artists new skills. Jaw was motivated to help new carvers develop their talents beyond the production of expedient carvings, which he perceives as linked with habits of substance abuse, and give artists greater confidence and autonomy. The key lesson that Jaw aspires to impart is patience, and encourages new carvers to take the time to develop their skill. He is supportive of actions that will lead to greater interdependence and self-determination among Inuit artists.

Jaw currently lives and works out of Kinngait. His work is held in the collections of the Musee d’art Inuit Brousseau, Quebec City, QC and the Museum of Anthropology, Vancouver, BC. He has been included in several exhibitions in Canada and internationally, and has been featured in the Inuit Art Quarterly. 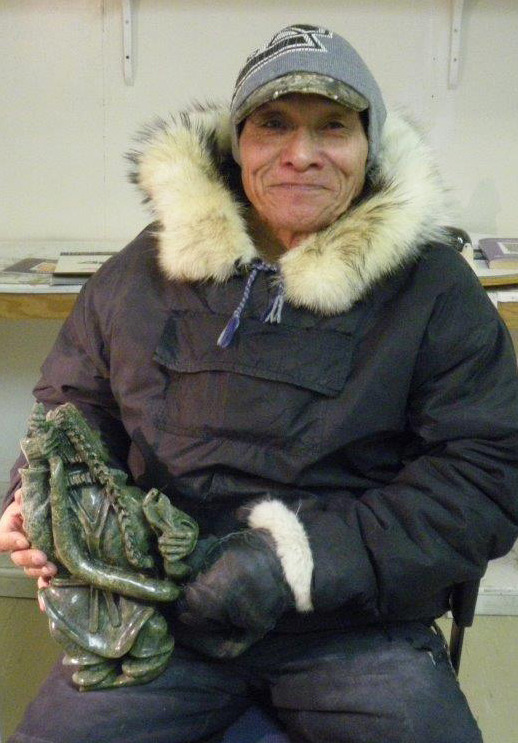 Ukpik Inuit Art Gallery is based in Nova Scotia on the Halifax Peninsula. We only accept gallery viewings by appointment - to visit our gallery please contact us by email info@ukpikart.ca or phone 902-220-0344